Daydreaming plays a large part of my life, and all of my artwork centers around it. I see my artwork as a physical manifestation of my thoughts and fantasies. The art program at Buffalo Grove High School has allowed me to develop my art skills, work in new materials, and has exposed me to a variety of artistic careers. 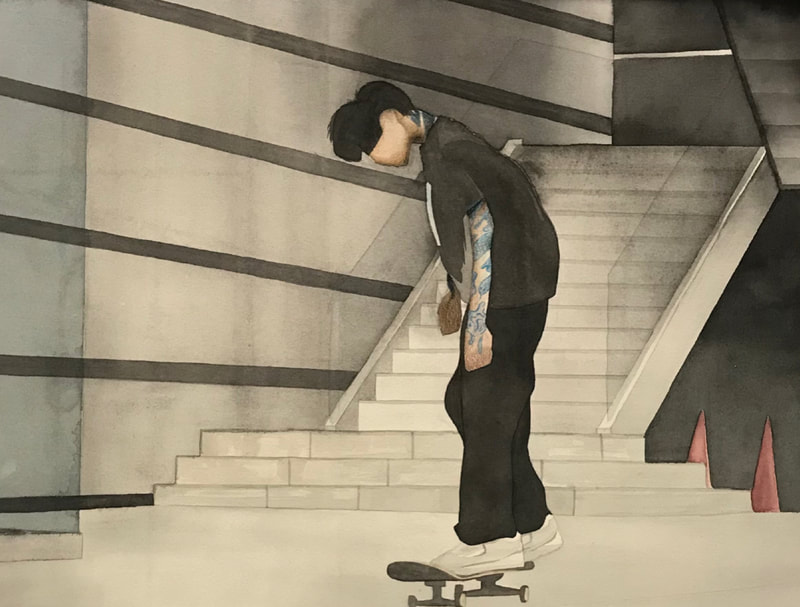 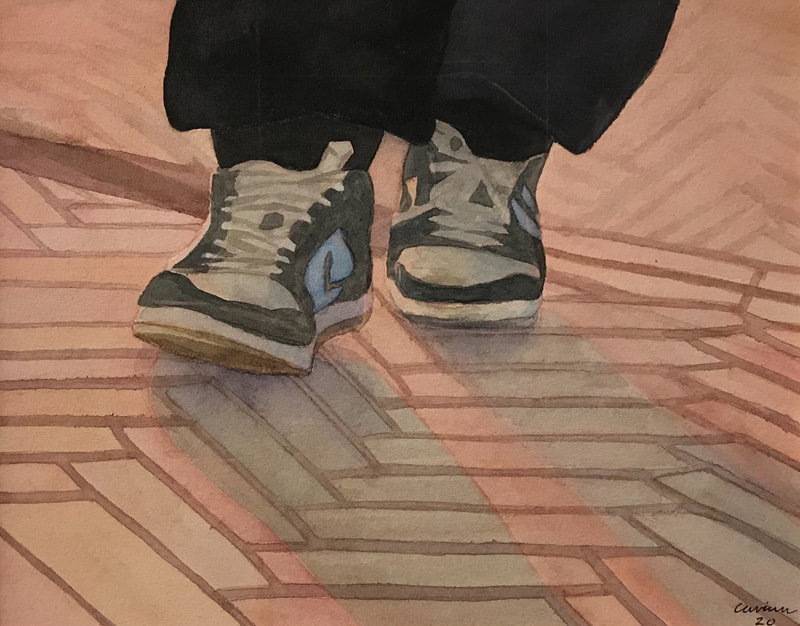 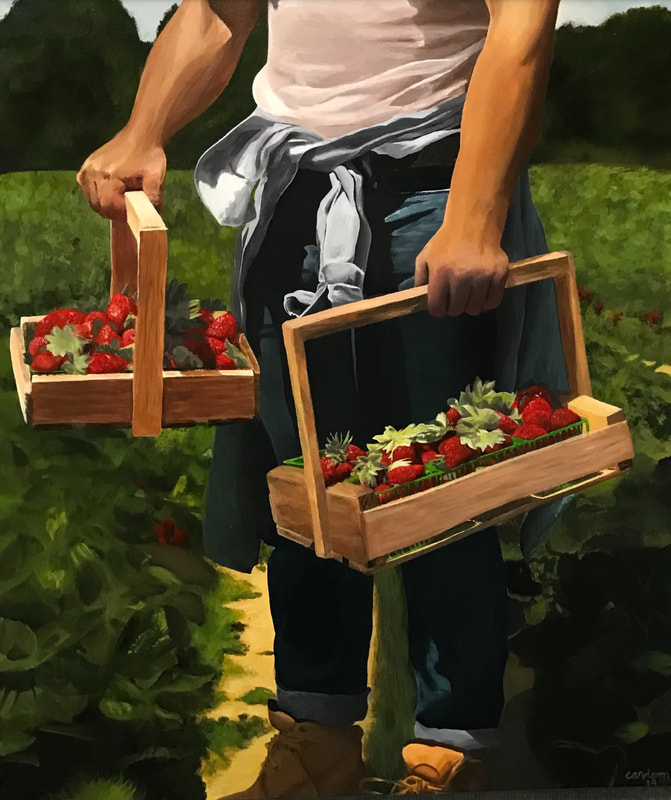 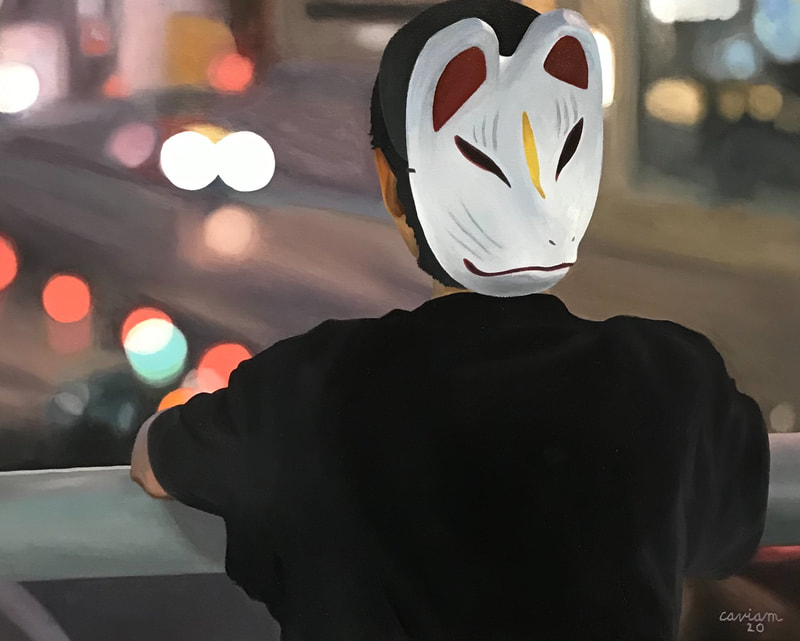 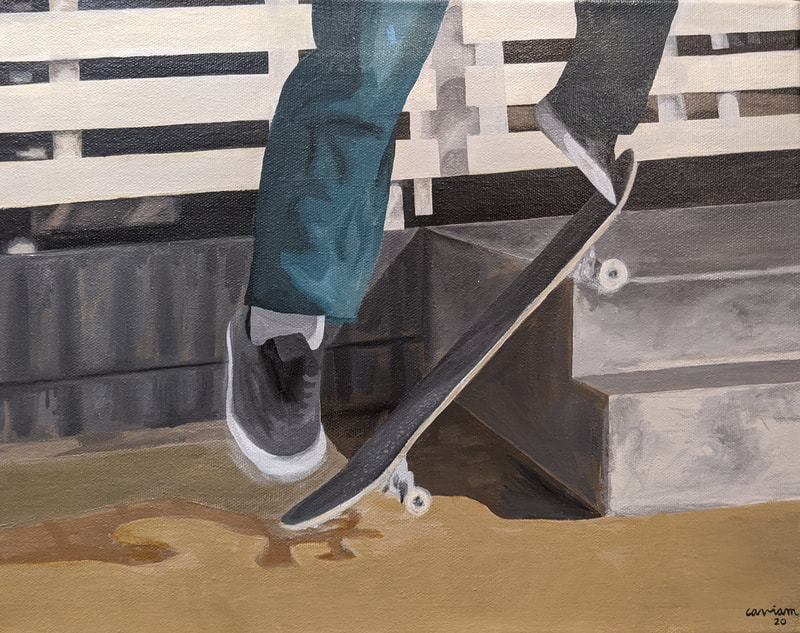 My work focuses on issues and struggles that many people face. I relate to them from my own background and personal experience.  Issues in friendships to bigger struggles, like addiction are the subjects of my artwork.

Although my work may seem intuitive or even haphazard, my process is very planned. I begin with a thought, a concept, a concern and come up with symbols, numbers, letters and words that fit and embrace the concept. Not only do I explore words in English, I incorporate Polish, my naitive language. I make specific selections based on how well I think a word or phrase will stand out in one language over the other. The process of creating symbols and incorporating numbers, letters and words is a way of decoding the issue, idea or thought.

This coding is used repeatedly throughout a piece and often goes through a series of edits and mutations. My artwork is a representation of various lines and connections coexisting between one another and draws links from one idea to the next. Lines are very specific. There is always thought behind it or explanation why it was made in a certain way. The artwork then becomes a coded message masking its meaning forcing the viewer to decode and find their own interpretation. 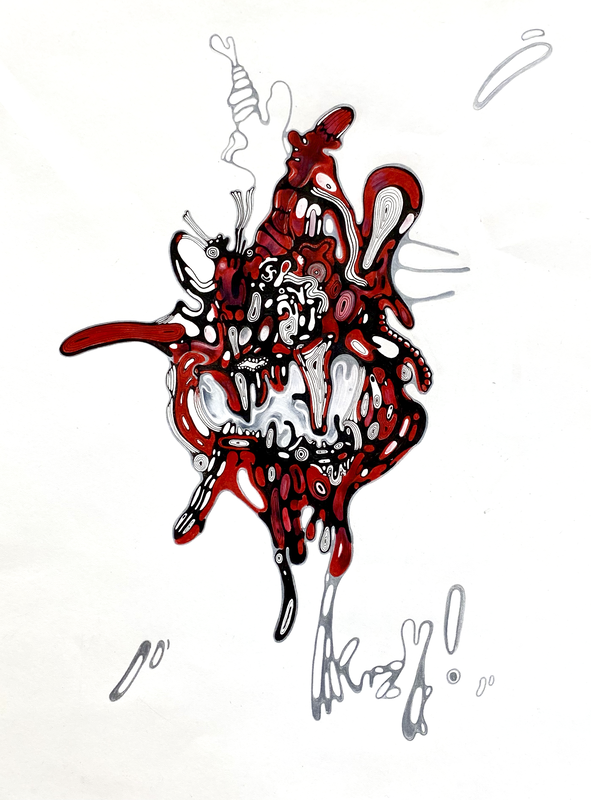 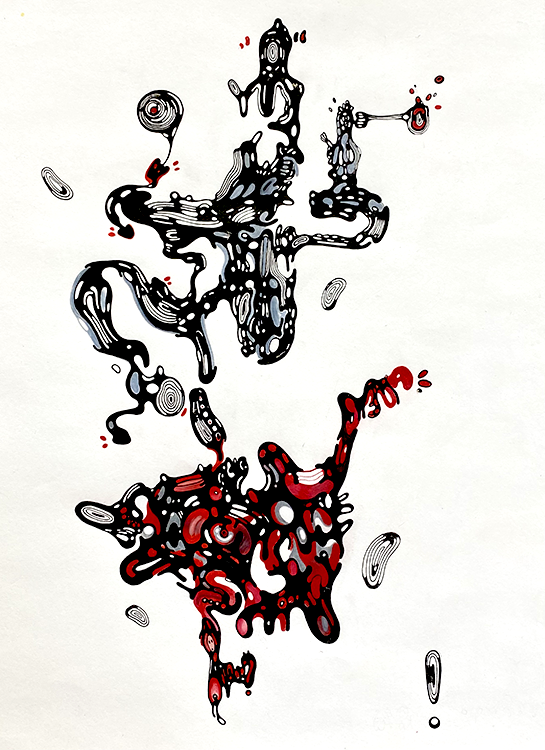 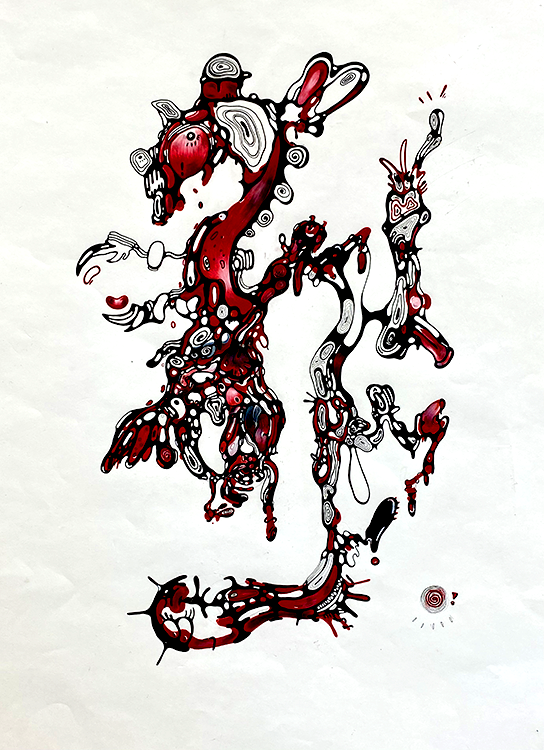 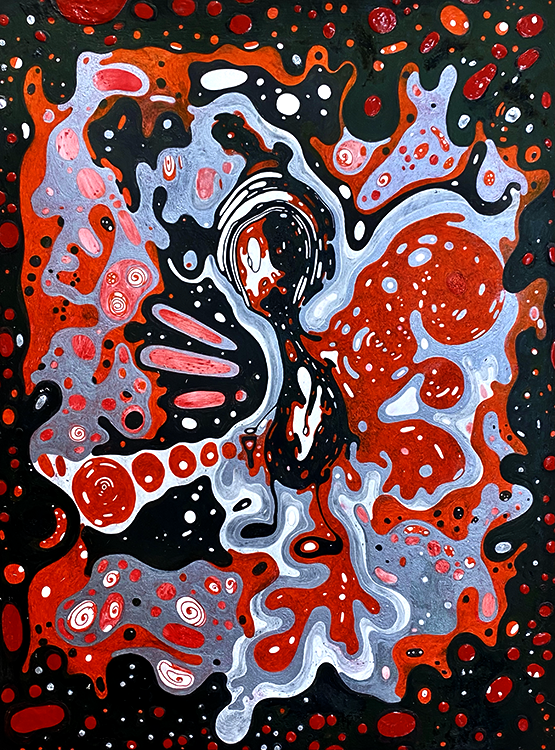 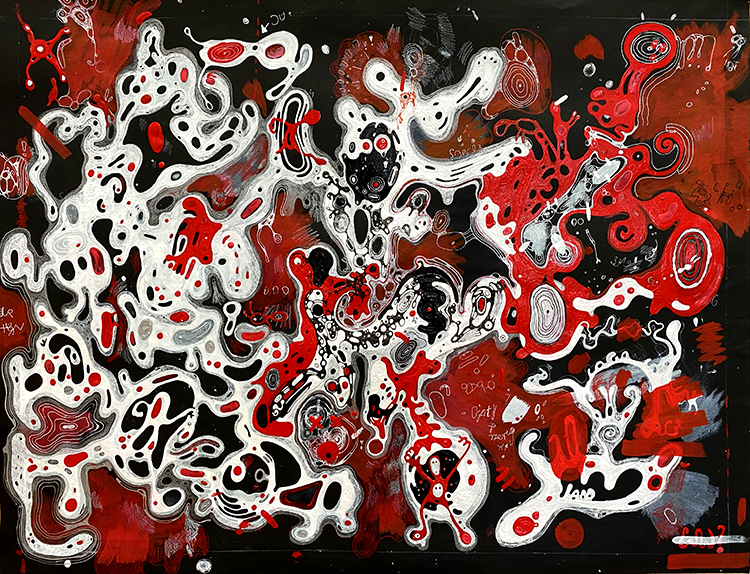 I have a passion for the impossible. I think everyone has a part of themselves that wants to create or do something no one has done before. That’s exactly why I fell in love with art; there are infinite possibilities  for what can be possible. There are no wrong answers and no rules. My art is usually one that visually focuses heavily on this, exploring freedom and unrealistic possibilities – whether it be simply challenging the traditional or reality itself. Something seen as ridiculous and impossible to do in the real world can easily become reality in an art form. The freedom of it excited me, I started doing art during secondary school; the beginning of both my exposure to the arts and my exploration of what I wanted to bring to the world. I began using art as an outlet and a way to really express myself. That was when people started to take notice. My classmates would sometimes crowd around my desk to see my creations, and even ask me to make something for themselves. I loved giving people silly little doodles that would crack them up, the laughter lingering after they tucked the scrap of paper into their pocket. I realized that this was the real reason I loved to create. I was able to make people question the traditional and create a feeling of intrigue while still keeping it somewhat humorous. Giving them a fresh perspective on what would be considered “the norm” and opening their minds to unique possibilities. In the future, I hope to spark this same intrigue through animations. Where I can watch what was once just a thought in my head play out smoothly in front of me. Where I can help the impossible come to life, getting closer and closer to becoming a reality. 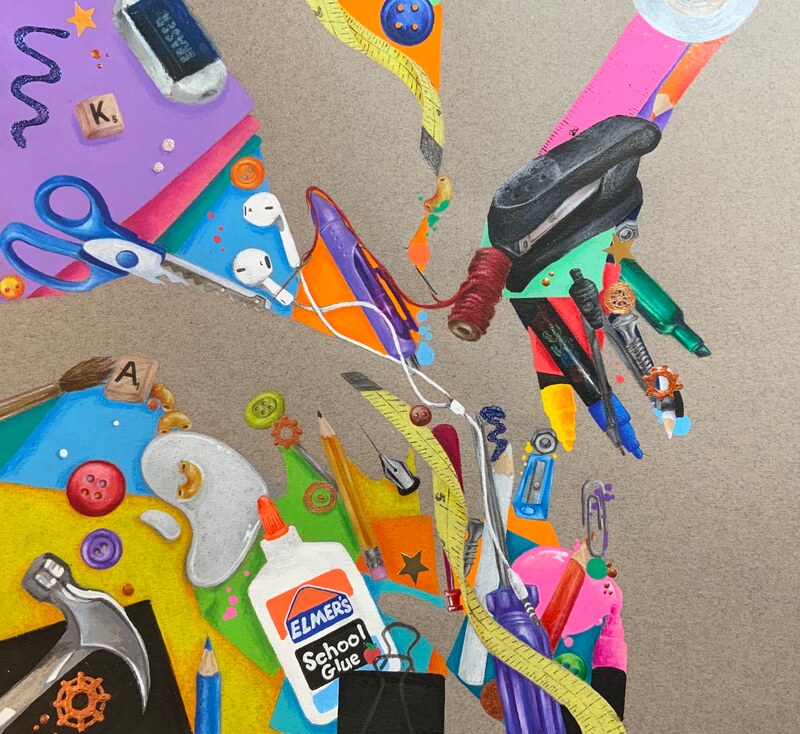 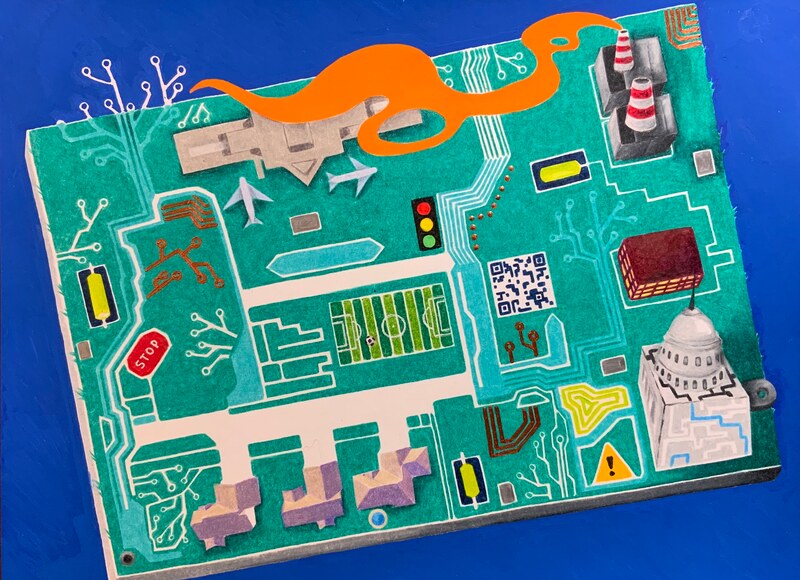 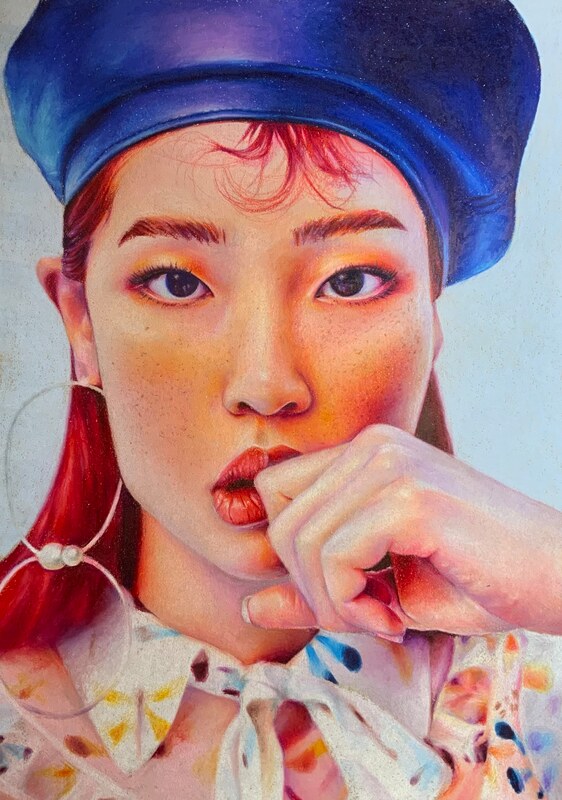 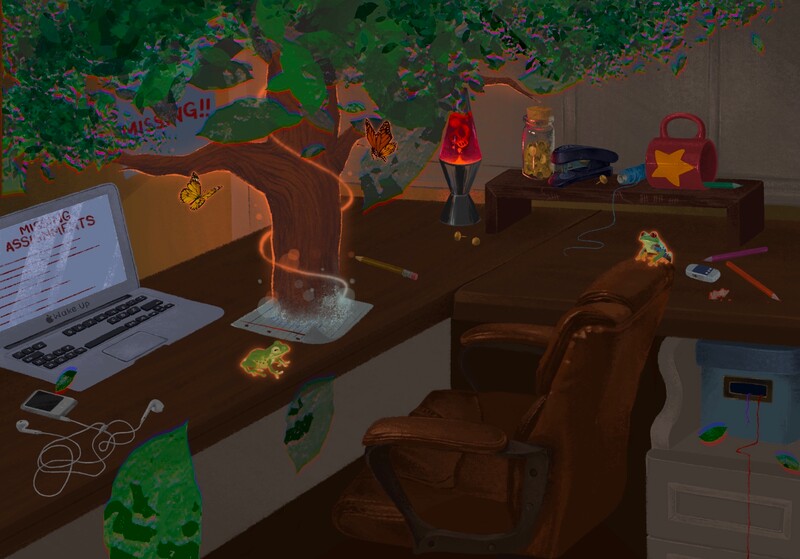 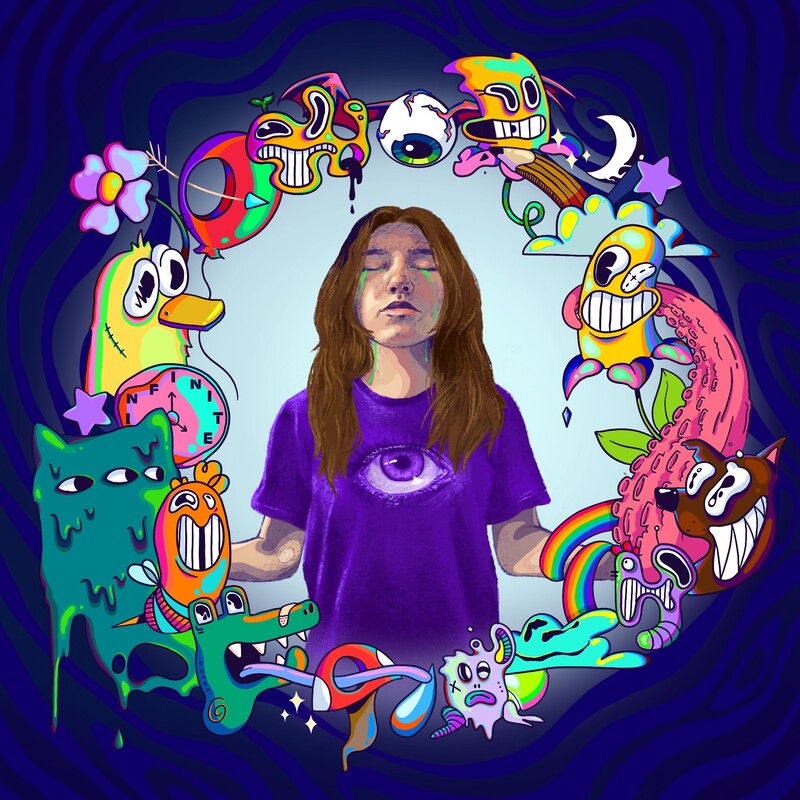 The purpose of my portfolio is to magnify the brilliance of moments that are typically considered mundane. A large portion of my work centers around the natural world and the strong emotions that it can provoke, whether it is grounding, inspiring, or anything in between. I often incorporate the feeling of connectedness between people and the universe, evident in the starry skies scattered throughout my pieces. In other works, I amplify the intensity and uniqueness of otherwise ordinary acts, such as holding hands with a partner. Through my work I hope to visualize and celebrate the weight that these passing moments carry and the positive effects they have on us. 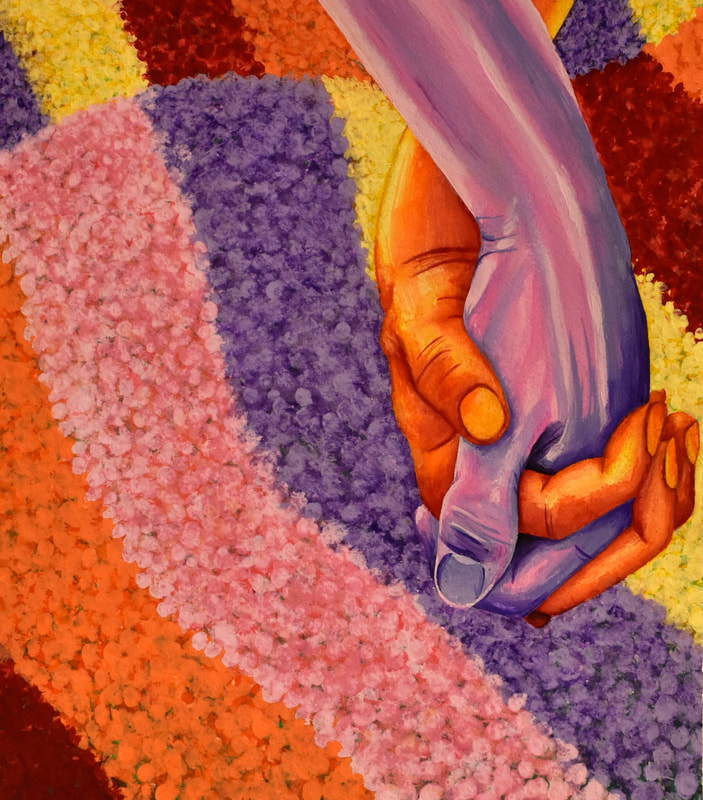 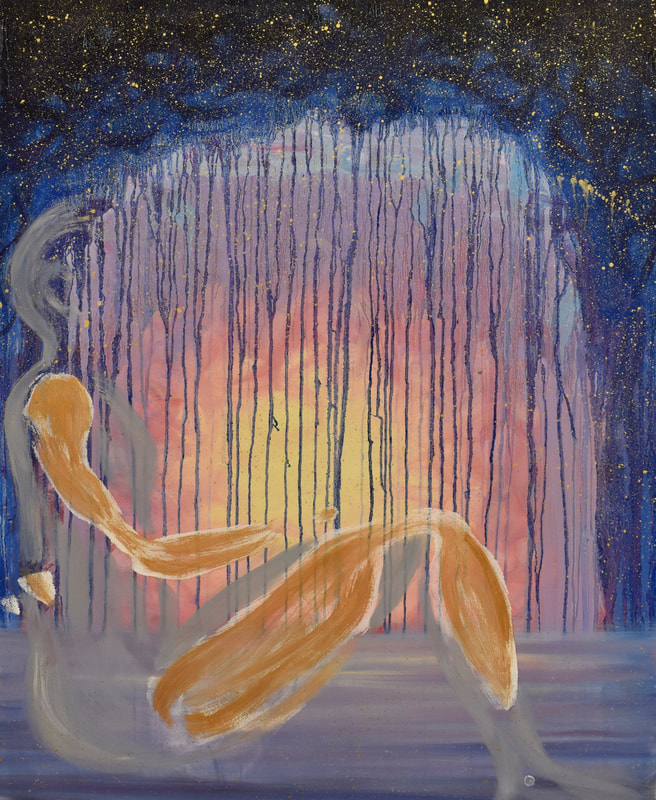 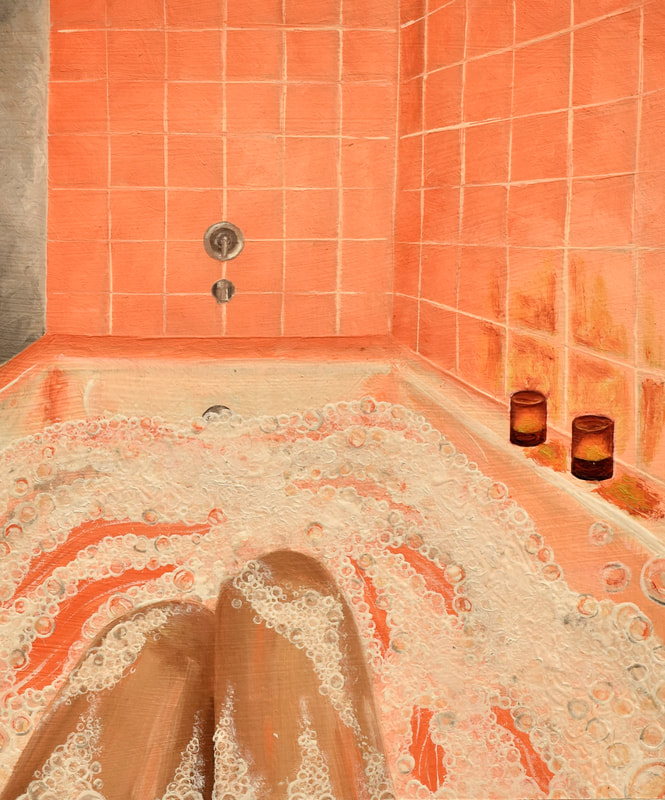 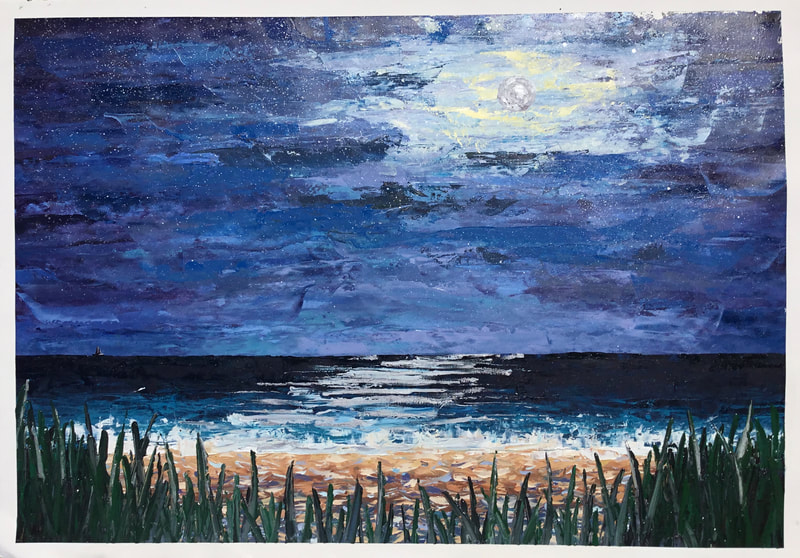 My body of work can appear to be unrelated in style and medium at times. What is consistent for me, however, is the drive to visually describe what I am experiencing inside. When I create art I am always trying to find a unique way to convey these ideas or feelings. When it comes to expression, I don’t limit myself to the possibilities of the final product. Though the interpretation of each work varies from person to person, for me it is important to translate the exact idea I have in mind. Having dealt with mental health issues, I found it hard to communicate how I felt and what I thought through words. Art has always been something I’ve done, so I used that skill as an outlet. My struggles have influenced most, if not all, of my art and the artmaking itself has been a way for me to process my feelings. I am grateful that I can present my thoughts so clearly and perhaps those dealing with similar issues can relate. On another level, my hope is that even if you don’t have the same struggles or experiences as me, you can take something away from it as well. ​ 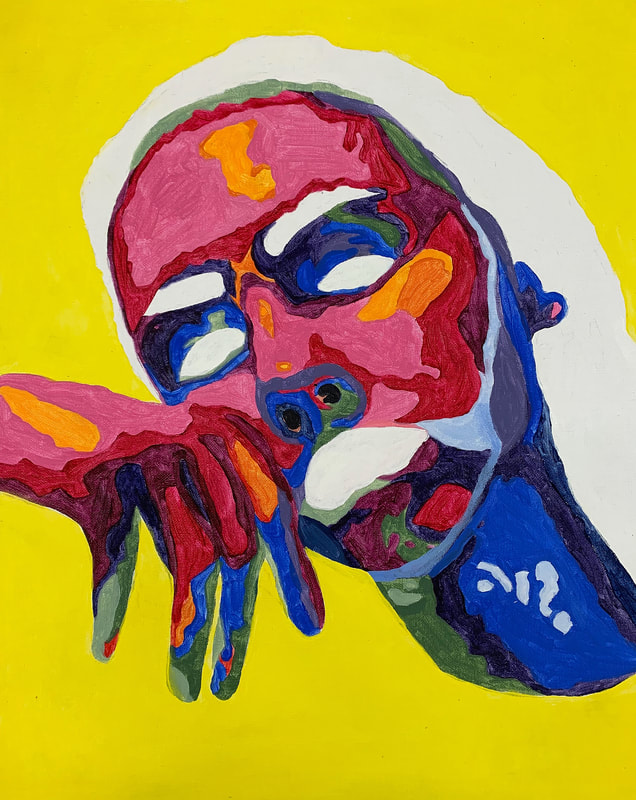 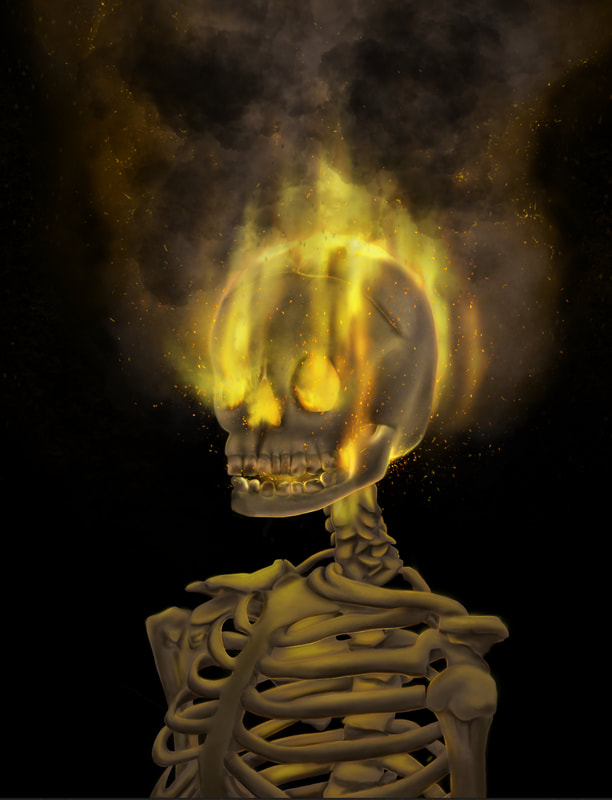 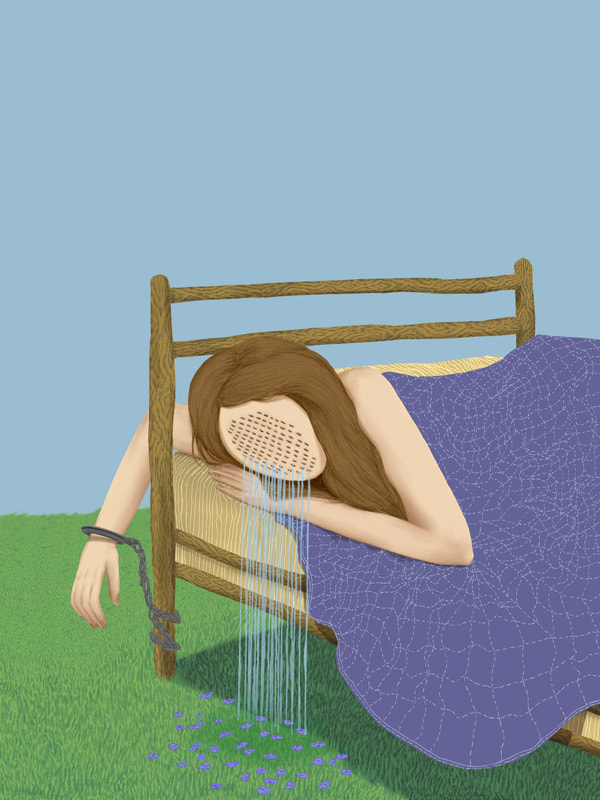 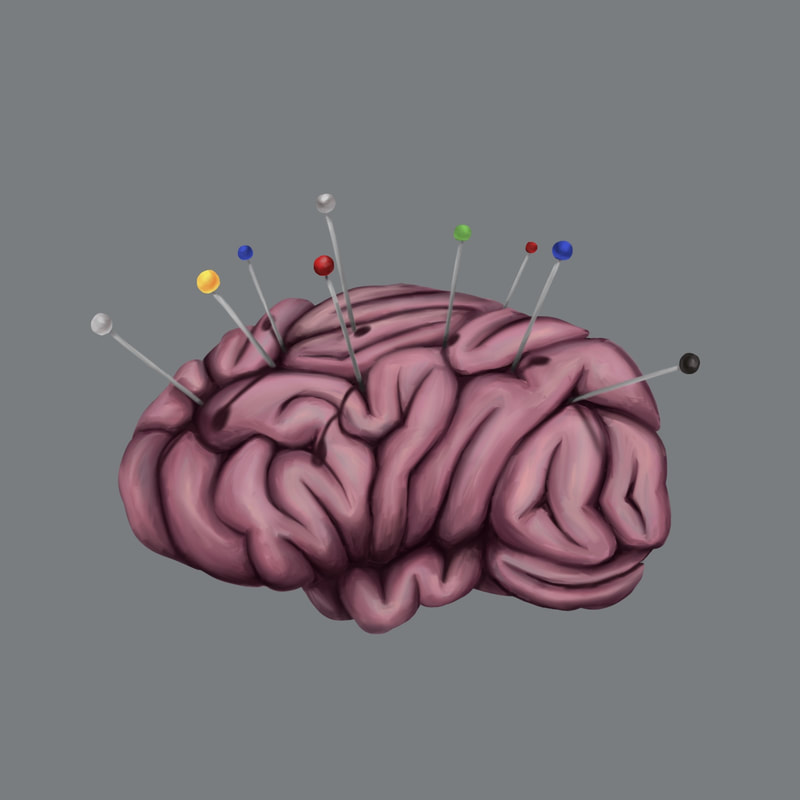 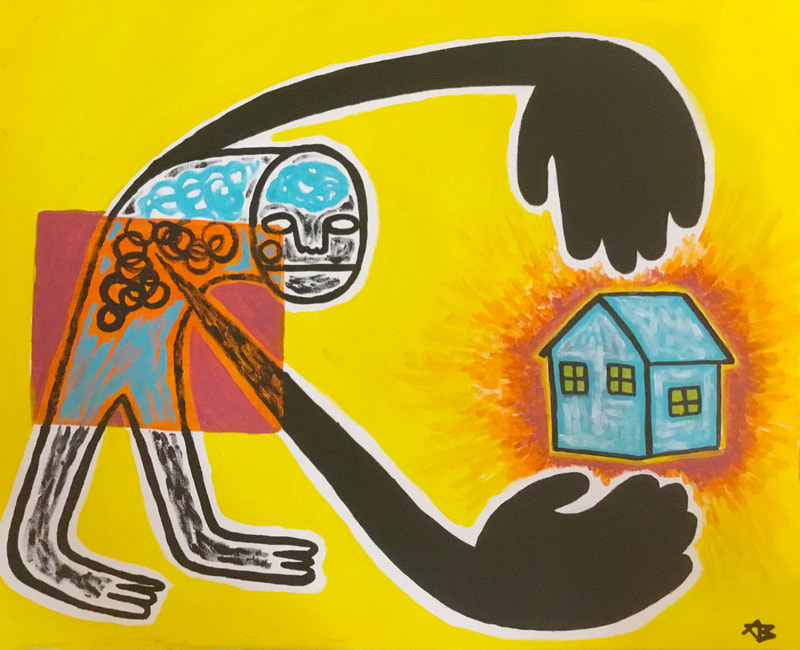 My sustained investigation explores the geographic, psychological, and physical dissociative effects of travel on the human psyche.

I began with corporeal figures in abstract forms. I was travelling on the highway and had the unfortunate experience of witnessing the aftermath of a horrific traffic accident and its effect on the human body.  I appropriated skull imagery from a mortuary science textbook and created several linocut prints of skulls and then reworked several of the prints into different abstracted body parts.   As I was making this piece, I was thinking about the physiological travel within our vascular system.  I incorporated maps into the white lines.  I continued with corpses and the concept of travel.  I created a series of self portraits that focused on the displacement one feels living in different communities and internal conflicts that arise when traveling in between the two.  I continued with the dissociation of identity through a series of multiple exposure self portraits that acknowledge the rush and anxiety of moving out of your comfort, and the detachment from yourself that ensues. 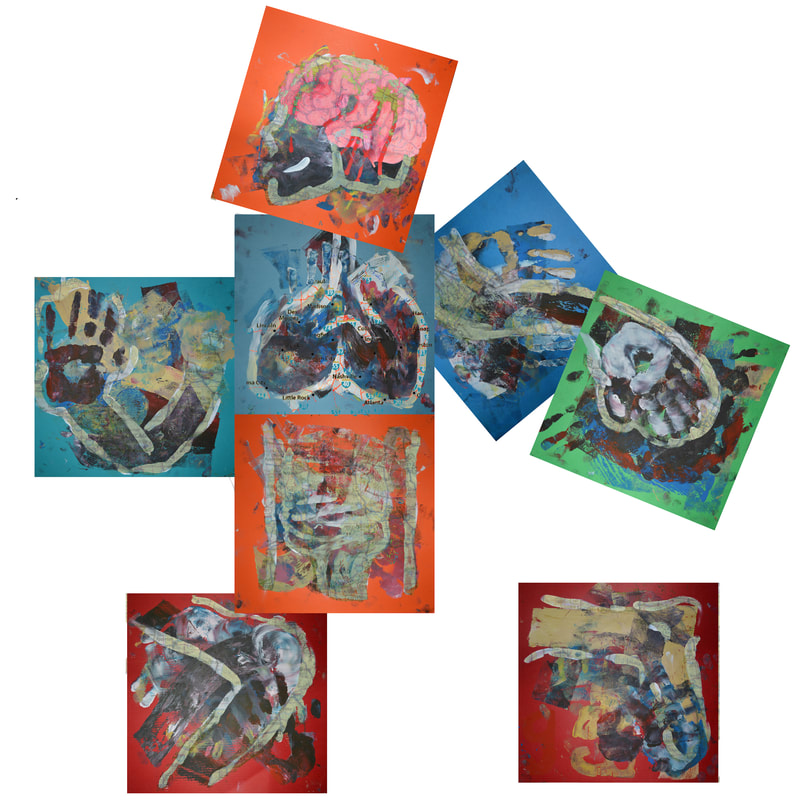 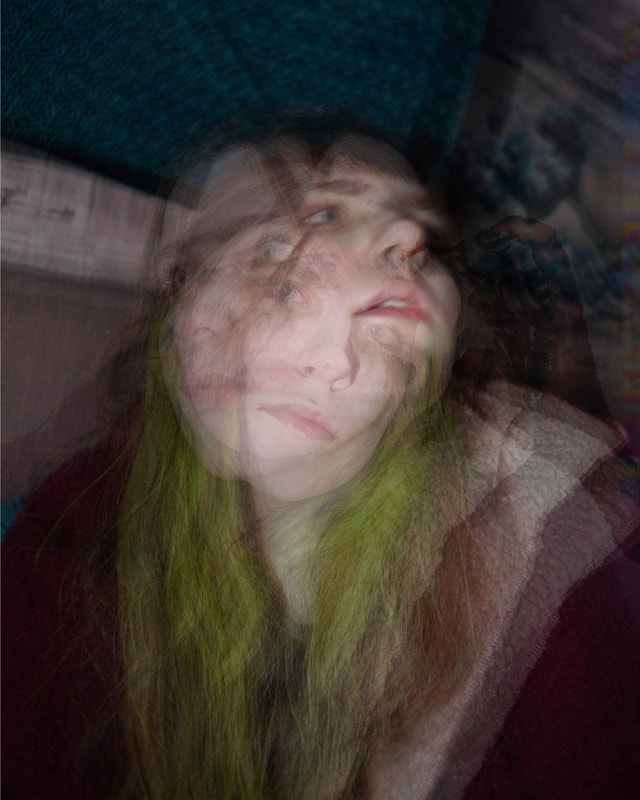 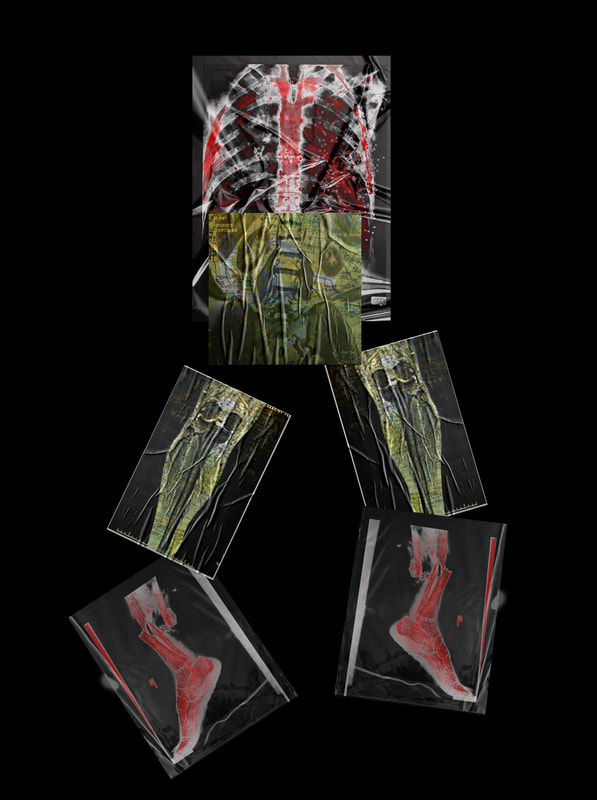 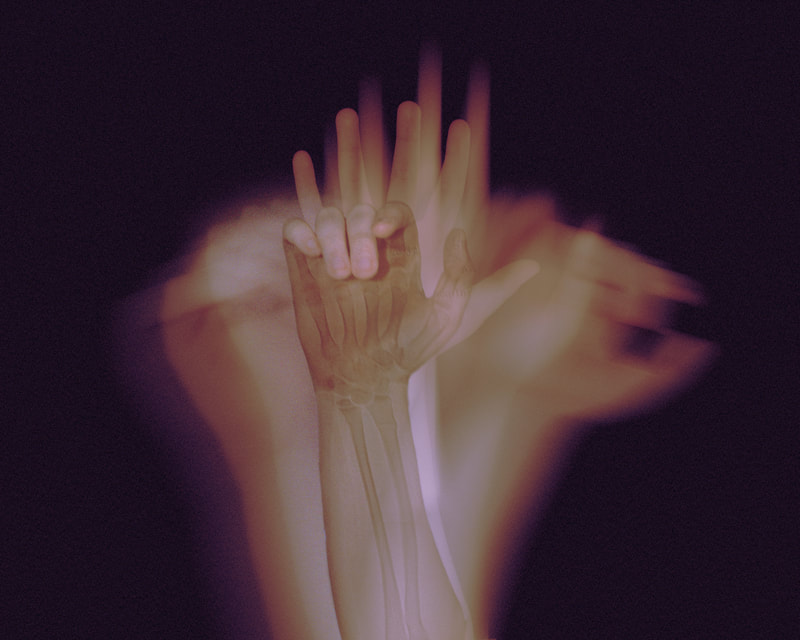 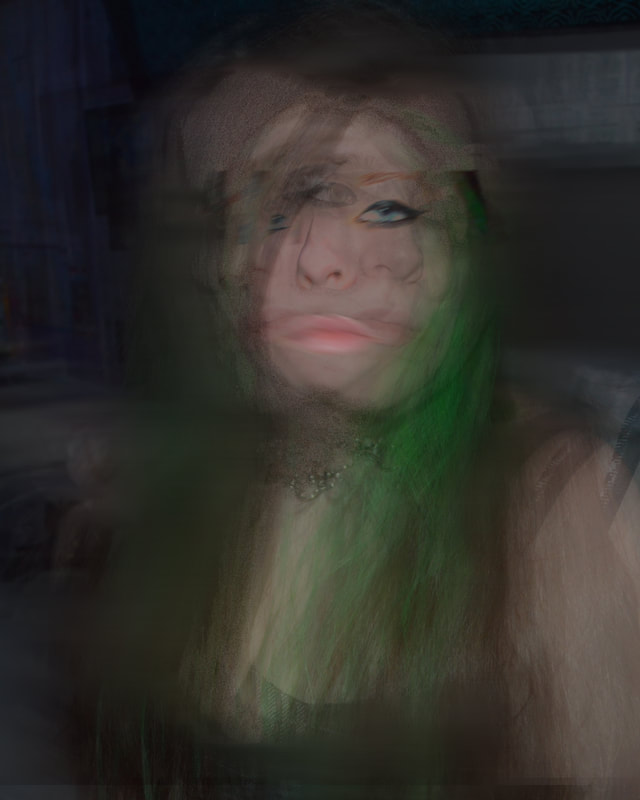